Paul Robeson – The Giant, In a Nutshell
This Little Light
From Black Africa to the White House
Tayo Aluko in concert
Half Moon. A 15-minute play
Masterclasses/Workshops

CONCERT: PAUL ROBESON – THE GIANT, IN A NUTSHELL

This is a concert of some of Tayo Aluko’s favourite Paul Robeson songs, along with snippets of information about the great man’s life, to live piano accompaniment. Includes powerpoint projection of images of Robeson and events and personalities of significance.
Requirements: Piano and pianist, projection facilities.
Duration: 90 mins plus interval

TALK: THIS LITTLE LIGHT
PAUL ROBESON: Keeping the light shining through the darkest of times.

Paul Robeson’s immense popularity with audiences at home and abroad led to his strident left-wing radicalism being seen as an increasing threat to the American Establishment. He became portrayed as a dangerous revolutionary and a non-patriot, and finally, in 1950, the State Department cancelled his passport, rendering him unable to travel abroad to perform. It would be another eight years before his passport was restored.

In this presentation, Mr. Aluko talks about Robeson’s refusal to separate his music from his international activism, and plays some relatively rare recordings from that darkest period of Robeson’s life, when American recording studios joined the rest of America in turning their backs on him. He also performs a few extracts from Call Mr. Robeson, and suggests how Paul Robeson can be a source of inspiration to us individually and collectively in today’s dark times.

LECTURE/CONCERT: From Black Africa to the White House (and Backwards): A journey of Resistance, Triumph and Spirituals

This is a musically illustrated talk exploring African pre-slavery history, Africans’ resistance to white domination over the centuries, and their eventual triumph (symbolically at least) with the election and inauguration of Barack Obama to the Presidency of the United States. “(And Backwards)” is a recent addition to the title in light of recent developments in American politics.

The talk is interspersed with Tayo singing a selection of Spirituals, as composed and sung by enslaved Africans and their descendants, including Paul Robeson, whose life story initially inspired the presentation. 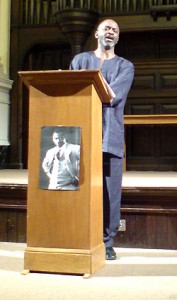 Other historical and more recent figures who fought for freedom, justice and independence in all parts of the Black diaspora, such as Nelson Mandela, Patrice Lumumba, Queen Nanny of Jamaica and lesser known figures like Funmilayo Ransome-Kuti of Nigeria are introduced.

Religion and African philosophy are discussed, with mention made of Malcolm X, the Nation of Islam and Jesus Christ, who is described as “the most famous non-white revolutionary ever”, and whose life inspired many of the spirituals known and sung to this day.

Duration: 60 minutes without interval
Requirements: A good pianist and a good, tuned piano
(can sometimes by supplied by Tayo Aluko and Friends)
Two standing microphones or a lapel microphone (only required for larger venues)
A lectern
Powerpoint projection facilities.

A concert of songs from different genres to suit the occasion, venue or host, from a home to a concert hall. The programme can range from jazz to folk song to opera. Black bow tie or more casual event, piano or band accompaniment. Corporate or social. Contact Tayo to discuss your requirements.

HALF MOON. A 15-minute play by Tayo Aluko

The artifacts of a British stately home are to be sold, and the proceeds divided by a divorcing couple. The white husband and his bi-racial (part African) wife argue over them, including a 3000-year-old Nubian death mask. The spirit of the Princess returns to visits the wife with words of guidance…

Ideal for performance by young people and adult students 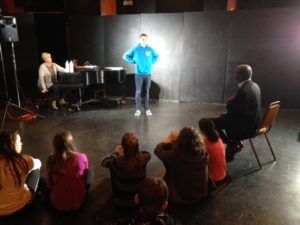 Having written three plays, published articles and travelled the world telling historical and political stories with songs, Tayo Aluko loves to share skills and lessons learned with others. Contact him to discuss possibilities.