“Greatness” In a Time of Covid is the title of a poem inspired by the bungling responses of the British, some other European, and the US governments to the Coronavirus pandemic, with the tragic loss of tens of thousands of lives. The arrogance of the governments, based on their colonialist histories, contrasted markedly with the extraordinary bravery and sacrifice of essential workers, and the fact that the majority of those who became ill and/or sadly died, were immigrants, or descendants of immigrants from former colonies.

Written and first performed by Tayo Aluko, “Greatness” contains themes which suggest that the poem would benefit from translation into, and performance in languages of the European states that colonised the world – Africa, Asia, North and South America, Australia, New Zealand and territories in between.

The idea of Mapping “Greatness” is to gather audiovisual performances of the poem from “People of the Global Majority” from around the world, in the languages of the former colonisers, in the local creoles and patois that developed from the colonisation and migration processes, or in their indigenous languages.

The performances are now being uploaded onto this 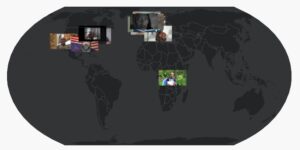 digital world map. Also available in the long term would be relevant information and links to resources on the colonial histories associated with that person’s or family’s journey.

On the recordings page, we also have information on the person’s and their family’s migration stories, and the recordings are also listed on the facebook page.

The text can be downloaded here, and is reproduced below in full.

Please note: All contributions are being invited on a voluntary basis. I am however happy to participate in a Poetry Exchange. Any poets who perform this poem can have their own poem on the same themes (no longer than “Greatness”), recorded by me and/or any other willing participants. These will go on the Poetry Exchange Page and facebook page.

This is an open call for the following:

Record to camera (phone, laptop or other equipment) in landscape format.
Please take your time! Ideally it should be no shorter than about two minutes, and up to about 2 mins 30s.

Please provide as much of the following information as you have, and are comfortable with sharing:
Name.
Where you live
Where and year born
Places previously lived
Parents born
Places parents lived
Grandparents born and lived
Same for other direct ancestors, going back as far as you can.
website(s)/social media

My recording of the poem can be seen by clicking this image  .

The text can be downloaded here, and is reproduced below in full:

We made our homes in the belly of The Beast

The Beast that devoured our ancestors

and spat them out on the other side of the globe

that stole our gold and rubber

our skills and knowledge

our art and music,

It gorged, and fattened itself,

and declared itself proudly

It saw its greatness in our puzzled eyes

as we stared up the barrel of a gun

from every corner of the earth.

Its guns were needed still (we were told)

to protect us from the socialists and communists

Capitalism, our enslaver for centuries

It bought our rulers

and continued the quiet theft

of our humanity and our dignity

as it planted poison and bombs

where once there was rice and diamonds.

And then the virus came

we answered the call to the frontline

to confront this invisible enemy

we asked simply for gloves, masks, visors and gowns.

As we fell, one by one

we finally began to see

that what the gentle ones had been whispering loudly

had been true all along:

on The Beast’s excrement

unmindful of the fact