An Audio Play, by Tayo Aluko
Directed by Olusola Oyeleye.

When a strange vinyl record is found hidden in a closet in Kenosha, WI, an unlikely connection is found between a Jewish family and the African-American singer Paul Robeson, recalling the racism, anti-Communism, anti-Semitism and near-fascism of the United States of the 1940s, with worrying parallels to Trump-era America. 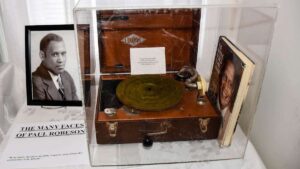 While clearing out their late mother’s belongings in August 2020, two siblings discover a package containing a record, suggesting a possible romantic link between their grandmother and Paul Robeson, dating back to 1949.

As they watch coverage of protests at the latest police shooting happening down the road from them, they recall their mother telling them of protests at a Robeson concert outside Peekskill NY in 1949.

They realise that as a child, she had witnessed the best and the worst of their country in violent conflict in the same way as was unfolding now in Kenosha, Wisconsin.

Contains some racist and anti-Semitic language.

This is an imagined story based around the Peekskill and Kenosha happenings.

“A political and cultural feast, delivered with panache, humour and plenty of sumptuous baritone.” Morning Star
“Thoroughly compelling and highly educational … my highlight of the Liverpool Theatre Festival …”  Writebase
“Emotional and powerful.” Number 9 Reviews
Organise a group screening with a Q&A with the writer and/or one of the creative team. Online or in person. Contact us for more information. 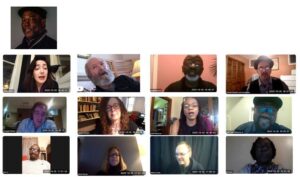